For 35 years, Peter Klauer has worked at the G. J. Lawson Wood-turning in Mordialloc. All the while working with familiar faces just around the corner from S&A Stairs. 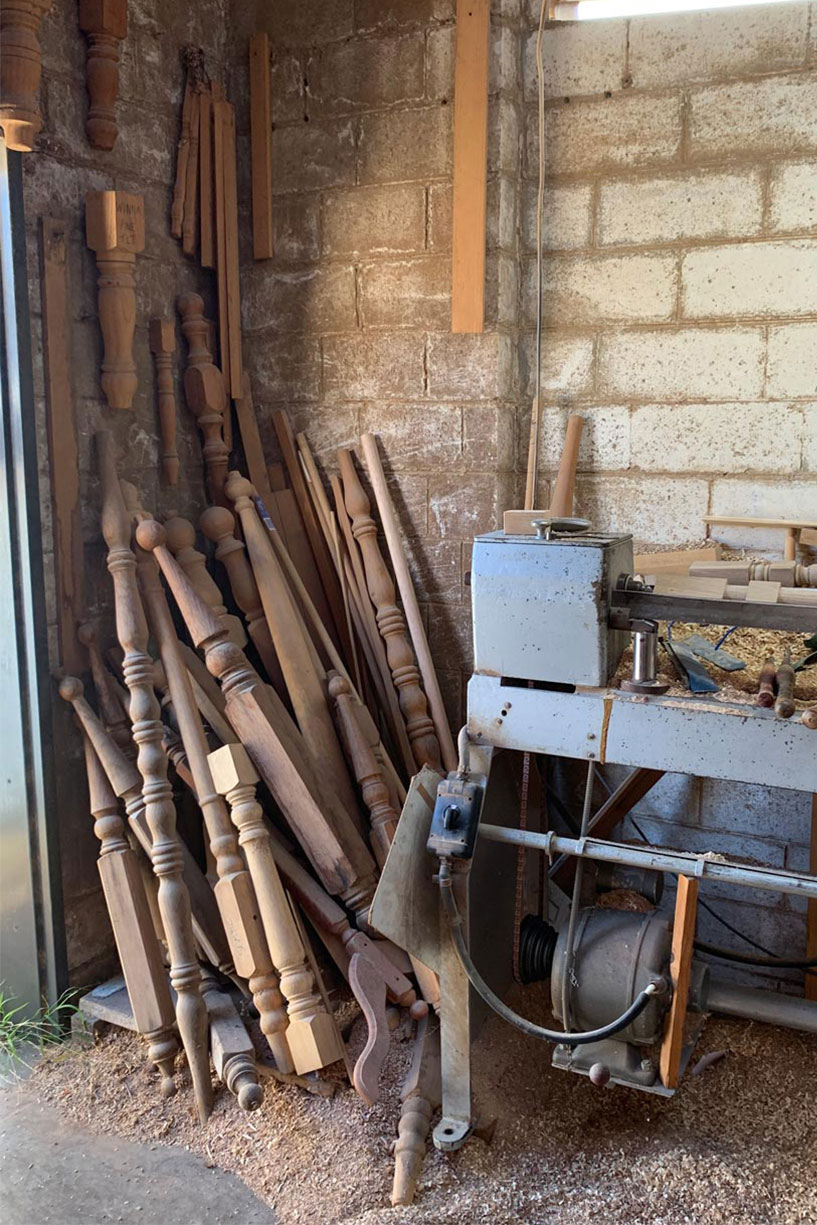 Hidden on a quiet back street, you’ll find the wood-turning factory, with “precise hand turning” printed on a sign outside that hangs on the brick wall. Sitting below the roll-down door of the factory, you’re consumed by an intense aroma of pine sawdust, which wafts over the entire factory floor. As Peter and I sit down and dust off what I assume to be the only two chairs in the building, we sit in the sun and discuss the craftsmanship behind staircases and wood-turning.

An apprenticeship in wood-turning is a longer course than your standard trade, which Peter completed whilst working alongside Gary Lawson. “It wasn’t a popular apprenticeship back in the day”, says Peter, “no one wanted to spend four years of their life learning how to wood-turn… which I suppose is why it’s not very common to find a wood turner who turns from hand like myself”.

When Peter first started working for Gary as an apprentice 35 years ago, they were creating fence and verandah posts, alongside table and chair legs, as well as stair posts too. Nowadays, Peter crafts incredibly detailed wooden stair posts, light fixtures and furniture by hand, and has earned the title of owner, sole-operator – not to mention son-in-law – of G. J. Lawson Wood-turning.

The factory itself is in its original condition. From the walls and roof to perhaps even a few of the small piles of sawdust covering the floor, not much has changed over its 35 years of operation. Original signage out the front and machinery inside: what may appear as a shed-like storage facility for an array of wooden artifacts, is what I would assume to be a wood-turner’s heaven. Plus, it’s home to decades of memories for Peter.

Whilst some have adopted wood-turning as a “hobby” these days, Peter’s work is something to be marveled. The skill-set applied is extraordinary, but to humble Peter: it’s clockwork. “I mostly work by hand and eye” Peter says, as he holds up a small chair leg he’s turned using this particular method. There’s no paper drawings or patterns anywhere, but there are pieces of wood, which Peter has drawn patterns onto with measurements finely scribbled in: a wood-turner’s ruler. Safe to say, Peter’s work and incredibly detailed methods are an art-form in their own right. “I can always tell my work apart from others… It’s like handwriting. Everyone turns differently, you can recognise your own”.

Slattery & Acquroff Stairs first sought out G. J. Lawson Wood-turning almost 25 years ago. Peter recalls one of his favourite projects with S&A– an enormous Jarrah project. “It was a huge project. We turned stair posts by hand that measured at roughly 200 x 200, and balustrades at 50 x 50. It was massive”.

Not only can Peter recall the most incredible details from his time working with S&A Stairs, he can also present the original stair posts patterns from 25 years ago. Four stairs posts of varying heights, materials and designs emerge from a small group of posts leaning up against the wall of the factory. They are hand carved, and in perfect condition, which Peter uses as a point of reference for S&A projects.

As we tread through the sawdust that covers the factory, collections of pine, American oak and cedar-wood are neatly stacked from floor to ceiling. The aroma of pine sawdust follows us on our tour. “Cypress pine sawdust makes you sneeze, and Cedar sawdust can make your face swell up” Peter says as we discuss this subtle characteristic to his factory. We pass an array of Peter’s work as we walk towards the back of the factory: lamp posts for Jardan turned from logs, dome-shaped light fixtures, remnants of chairs and table legs, and an exact replica of the Melbourne Cup trophy.

As Peter climbs through the piles of pine to fetch the trophy, you can tell that as he dusts the replica and takes a moment to admire it, each piece in this factory has a memory or a story to tell. Particularly the trophies, which he turned alongside Gary and other employees 15 years ago. “At one point (15 years ago), we turned 20 odd trophy bases every year” Peter says, adding that trophies turned in the G. J. Lawson factory where made from “Brazilian mahogany” back then.

“Years ago, we used to have all sorts of cricket and football tournaments out the front of the factory during the Summer months. Me, Gary, Wayne, Darren & Troy (S&A’s very own) who all used to work here would compete for the replica trophy like this one. I won it a few times back then”.

A workbench covered in sawdust towards the back of the factory is where the magic happens. Stair posts, chair & table legs are perfected at this tiny bench at the back of the factory. There are some tools to the trade, as they say. To the untrained eye, they may look like medieval medical pliers of some sort. To Peter, they’re his “bread & butter”, as they decorate workbenches and hang on the dust covered walls and shelves of the factory. Gauges, skew tools of varying sizes, and parting tools can all be found.

“The difference between me and a machine, is that I can create all of these sharp details along the posts, whilst a machine will round them off or miss them altogether”, Peter says as he compares two stair posts, pointing out the distinction between his craft and an automatic. I assumed that this level of work and precision requires hours, if not weeks to create – “if it’s pine, I can have it done in about 15 minutes. And ash, probably about 20”. Peter informs me that “not only can you create a sharper and far more distinct pattern, but you have the ability to change and modify the design as you go on”.

It’ll come as no surprise that Peter is an incredibly humble man, with a memory that would challenge the sharpness of his finest tools. But, what struck me most about Peter was not only his ability to recall the most intricate details over the course of his time as a wood-turner, but his immense pride in the work his created.

Today, having taken over from Gary, the G. J. Lawson Wood-turning factory is Peter’s own. It’s Peter who carries on the tradition of this craftsmanship, which he’s perfected over the years, applying his distinct style to all that he turns. His factory still turns work for S&A Stairs, creating refined stair posts, with intrinsic details as a result of S&A designs and Peter’s wood-turning skills.