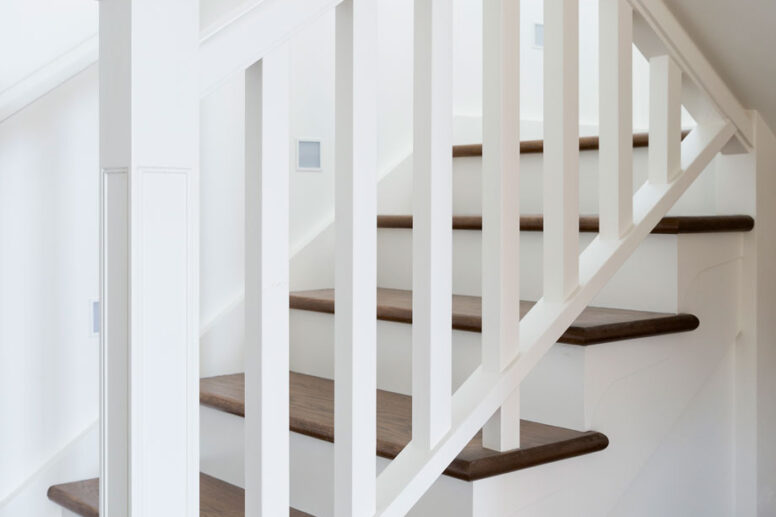 Whether you are restoring an original masterpiece or building a faithful reproduction, thought must be given to the finer details of the staircase. This applies equally to period and contemporary designs.

Whilst traditional or period staircases can be easily reproduced by our expert craftsmen, there are some things that we can't pull out of a hat, such as timber species that were prevalent many years ago but are no longer available, and the same applies for timber sizes. What was a solid piece of 100mm x 100mm Australian Red Cedar handrail a century ago, may these days need to be laminated out of two pieces of 100mm x 50mm in a different species of timber altogether, such as Honduras mahogany or similar.

The following is a guide to the most popular architectural styles that have been built in Australia over the past two hundred years.

The Colonial style is notable for its symmetry. A central front entrance with windows either side and wide verandahs are typical characteristics of the Colonial period. It is not uncommon for the verandah to encircle the entire structure. Usually single story buildings, Colonial homes are simple in style and often feature subtle touches of the Georgian or classical detailing that were popular in Britain in the mid-19th century. The Colonial style expresses a sense of dignity and spaciousness. The mouldings of the era are simple. Having a few decorative elements, they typically feature straight lines with smaller detail at the top.

The Victorian style is particularly elaborate and richly detailed. Its main characteristics are balance, proportion and elegance. This architectural style refers to the reign of England's Queen Victoria, which began in 1839. The period is commonly divided into Early Victorian (1840 to 1865), Mid-Victorian (1865 to 1880) and Late Victorian (1880 to 1900). During the Victorian era, Georgian and Regency styles were dominant styles for public buildings, while Gothic was the style of choice for most churches. Grand residences built in the Victorian period were designed to exude affluence and express social standing through the size and detailing of the home. They were a reflection of the progress and prosperity of England's colonies. Mouldings of the Victorian era tended to be elaborate and rich in detail. Door blocks were a common feature and many of the larger Victorian homes incorporated highly decorative two and three piece skirtings.

This architectural style is named after England's four King George's and draws heavily on classical influences. It is typified by formality, straight lines and fine detail. Georgian designs are symmetrical. Paired chimneys as well as decorative "crowns" above the main entrance are commonly featured.

Australian Federation architecture had a wide variety of influences and a dozen "sub-styles". Classical motifs were commonly featured in Federation-era public buildings and were used to express authority, wealth and a sense of culture. The Gothic style and, later, the Romanesque (then popular in the United States) were often applied to churches during this period. Queen Anne, Arts and Crafts and Bungalow designs were typically the choice of the day for homes.

Named for Edward VII, who ascended to the English throne after the death of Queen Victoria, the Edwardian architectural era is characterised by highly decorative ornamentation in its early period. Later, the ornamentation was pared back and a simpler, more masculine look prevailed.

The first truly modern architectural design style, Art Nouveau represents a rejection of the Industrial Revolution's mass production techniques. It departs from earlier architectural practices of refining historical and traditional designs, and, instead - looks to nature for inspiration. Its underlying idea is to elevate the decorative arts to the level of the fine arts by applying high standards of craftsmanship in the design of everyday objects. Art Nouveau designers adorned their buildings and interiors with stylised flowers, vines and other motifs taken from nature.

In Australian society, the era of mass communications technology brought with it an expanded interest in the cultures of overseas countries - particularly in things American. The demand for new housing was high after 1918. Functional simplicity was the order of the day. Californian Bungalows, with their asymmetrical facades, were less ornate and less formal than Queen Anne homes. They were the style of choice by the 1920's.

Heavily influenced by the Paris Exhibition of 1925 and the discovery of Tutankhamun's tomb in 1922, this style incorporates the zig-zags and geometrical shapes of cubism as designs inspired by Ancient Egypt. Art Deco homes and public buildings typically feature facades with zig-zags and stylised floral, geometric and "sunrise" motifs.

Contemporary stairs are difficult to define due to the fact that contemporary architecture in its purest form hasn't been design yet. Contemporary stairs can be shown in a pictorial sense, however, because they are designs of the moment, they are not yet classified in a period of their own - in the same way Victorian and Federation styles are.